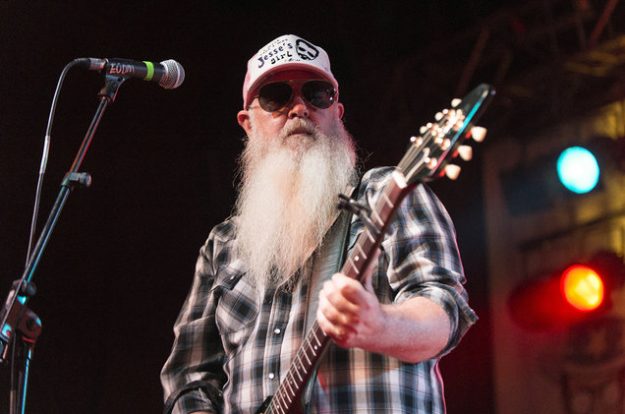 As an original member of Queens of the Stone Age, founder of stoner-rock band Earthlings? and current guitarist of Eagles of Death Metal, Dave Catching — owner and resident of famed Joshua Tree, Calif., recording studio Rancho de la Luna — is lucky to call the most talented people in the industry friends. Foo Fighters, Iggy Pop and PJ Harvey have all recorded at Rancho, as well as others too numerous to list.

So it makes sense that Catching would be inspired to collaborate there with some of his most talented friends. Shared Hallucinations Pt. 1: Sonic Salutations From the Venerable Vaults of Rancho de la Luna 1972-1984 (May 26, Dine Alone) features recognizable collaborators like The Duke Spirit’s Liela Moss and Screaming Trees’ Mark Lanegan.

While the album is a quick, approachable listen that evokes QOTSA, Catching says he drew inspiration for the project from ’60s-era psychedelic compilations, where each track told its own story. Fitting, then, that the record-release party (to take place at Pappy and Harriet’s Pioneertown Palace on May 27 in Pioneertown, Calif.) will feature performances by Mojave Lords, The Mutants, Sweethead and Sumo Princess.

Billboard talked to Catching about the tales behind the music, which are rooted in teenage shenanigans, playful double-entendres, a love for Kiss and a mushroom-induced hallucination that once scared him out of his wits.

How did you come up with the title of your LP?

The Pebbles and Nuggets albums from the ’60s and ’70s always had a pretty interesting slant to their titles, and since I was making a compilation record, I wanted it to sound like it had been put together by different people over the years. It kind of sounds like stuff from different eras.

The first track, “Bought and Sold,” is the first single. Who worked on that with you? I thought it was an interesting choice to start with a female vocalist.

That’s Liela Moss from The Duke Spirit. They recorded an album at my house with Chris Goss [Masters of Reality] called Neptune and supported Eagles of Death Metal on tour. We became really good friends. Liela heard the song and loved it, and wrote and recorded it in like an hour. So as much as I wanted Jesse [Hughes of EODM] to sing on it, she completed it, and it was so good that I had to go with it.

Listen to “Bought and Sold” here:

That’s one of my favorite songs, and I think that’s a great opener to the album.

It’s one of my favorites, too. It leads you into the album … I think a lot of people could kind of relate to that instead of hitting them with something hard or heavy to begin with.

It seems very mellow and inviting, and I felt the same way about “Ghost Stories” — it’s such a good, transitional track. What was the inspiration behind those lyrics?

Gary Wertz [of Strawberry Smog] sang and wrote the lyrics to that. We recorded that with Jonathan Hischke [Dot Hacker, Hella, Broken Bells] and Barrett Martin [Screaming Trees]. I was having trouble coming up with a guitar solo, and he put it together in seconds.

The female vocal is Serrina Sims [of Sweethead], and the male vocal is Troy Van Leeuwen [of QOTSA]. I gave that to them because I felt like they could really nail the vibe of it, and they exceeded my expectations tenfold. I wasn’t expecting the Troy part: It has a Bowie, Man Who Sold the World vibe.

It’s nice that people can impress you sonically or vocally when you put them together.

A lot of people I know … they definitely have an idea of exactly how they want things to sound. I had gotten to the place where I didn’t know what to do with them anymore. And that was the fun part of playing them for people and having them say, “Ah, I like this one! Let me try something with this.”

“Your Daddy’s Waiting” has a playful and fun vibe to it. What’s the story behind it?

When I was a kid, I took a girl to see The Police on their first tour. They were playing a tiny club in Memphis, and we were both so young: I think I was 17, and she was 16. We snuck out, and somehow her father found out. Someone came [into the club], and they were like, “Hey, your daddy’s waiting outside. He found out where you guys are. He wants you to get out here, pronto.” That’s how I came up with the title, and it kind of developed from there.

I never saw her again! And she was forbidden to see me… young love.

I did indeed. Chris Goss is the ‘Give it to the DJ’ voice. He’s playing a lot of the cool stuff on there as well, so… that definitely ties in with the Queens, because he produced a lot of Kyuss and Queens stuff, too.

“Electric” is well placed in the flow of the album. I see this as a great warm-up for a show or a song that you’d listen to at a bar at the beginning of a night out. It’s got an energizing feel to it.

I’m glad that you got that. That’s how I feel about it. That one was written a really long time ago, and I recorded the guitar part on my computer. A couple years later, I gave it to Sean Wheeler, who sings on it, and he’s a really awesome guy.

His first lyrics were just one line repeated over for the whole song. He finished and was like, “That’s cool, right?” And I’m like, “Dude, you just sang the same line the whole song!” And he goes, “Yeah, but that’s cool, you know?” And I’m like, “No, you’re just being f–king lazy. You got to write some lyrics!” I think those are probably the funniest lyrics on the record. It cracks me up every time.

“Candy” has a very cinematic, story-like feel. It’s very pretty and has a retro vibe. Is that what you were going for?

I had the whole song finished and I didn’t have any lyrics, but I always liked it. I gave Abby Travis the song —she and I played in Eagles of Death Metal, Earthlings?, Masters of Reality, and a lot of other bands… I wasn’t going to put it on the record because it’s so different, but I really like what she did with it because the story is pretty amazing: You definitely visualize a lot of cool stuff in there.

Is “Candy” literally about candy, or is that a euphemism for something else?

You’d have to ask Abby, but I would assume it’s probably some of each… some candy and some other things.

The same with “Shared Hul”: When you talk hallucinations, are you referring to drug hallucinations or just a similar experience with someone?

That is actually a true story. It’s about a time when my friends and I were really young, and we picked some mushrooms from a field and went back to my parents’ house. It was Saturday night, and a chair got up and danced in the middle of the room and then went back to where it was. I saw this, and I was freakin’ out. And then someone said, “Did that chair just get up and dance in the middle of the room?” That really freaked me out, because I’ve never had a shared hallucination with anyone.

“Come On” is another fun song. I could see it being played at a barbeque in the summertime. It’s got an infectious groove.

I’m really glad you like it, because that’s one of the other ones that was finished really quickly … I was just playing my guitar, and the tone dictated the song. It’s kind of like my homage to Kiss: I grew up with Kiss, and it’s supposed to be a Kiss-type song.

“Ghosts” is a definite change of pace, and also the first song to feature piano and guitar. Is there an organ on it, too?

Most of it is organ, trumpets and everything. My friend Chris Goss is one of the most talented guys I know. He brought over this giant organ a long time ago, and he did incredible things. I had to get rid of it because it’s kind of falling apart, and it was so giant that it took up so much space, and almost everything on that track is that organ. And then I gave it to Alain Johannes to do with Mark [Lanegan], because Mark was recording a lot of stuff with Alain at the time. So that’s another one where everyone heard it and added things to it. It really does change the vibe of the whole record.

“Pretty Bird” works well between the last two songs. It’s energizing, yet it almost sounds like a rebound song after mourning lost love.

I like that you picked that up, because it feels like that to me. Alain Johannes really is the most talented musician I’ve ever met in my entire life. There’s absolutely nothing that he can’t play, any instrument or vocal. He’s the nicest, coolest, guy. I ended up getting the riff together and came up with this drumbeat and played the guitar, and Alain took it to the next level with his beautiful vocals. It’s almost like a hard-rock, Stevie Wonder vibe. I don’t know how to say it, but it kind of works like that. Troy [Van Leeuwen] ended up playing on that as well and really turned the song on its head. I can’t say how much I loved what Alain did to that song.

“Overdrive” is a great choice for the closing track. It has very empowering lyrics for anyone trying to escape a bad situation or who needs a good kick in the ass to make a change.

I can’t remember what the original lyrics were, but they were a little bit different. And I was like, “Nah, we don’t do negative here. We’ve got to do positive. This song is too rockin’ to be a negative song. We’ve got to change it.” It’s supposed to be a fun song, and I think it’s a good way to leave. It kind of pumps you up and leaves you in a good place.